The way of my creation

Dear visitors, welcome to all. You will first find a brief description of the progress of the construction of my work. Further, the discovery of my creations will take you through the different formats or categories that I have been able to make of them. The most recent creations which require continuous updating, sometimes tend to be a little too numerous, please excuse me. I don’t always take the time to remove the oldest ones.

Finally, a short biography which brings me again to a brief look and description of my artistic tendencies. Thank you for your time and interest in my work. I can of course be reached at the references indicated at the bottom of the site.

It seems to me that the road of the construction of my works is comparable to life, I mean to my life, but also perhaps to the life of each individual.
First of all, we are a unique piece with intrinsic value. Then this entity, along the way, meets, binds, associates, separates, dissociates and, as a result, changes, shapes itself, is part of a whole, seeks the union that will complete it and affirm its existence.
Likewise, the original piece of relative intrinsic value, more or less aesthetic, but of course still eye-catching, appears in my path. So I grab it, approach it, the relationship sets in, I put it in my pocket or on my back. As beautiful as it is, all alone and isolated, it will remain a creation of nature or of chance, but not that of the artist.
After a while, this object intersects with many other pieces in my studio. In the multitude of presences, individualities seem so made for each other, similar to individuals who in the multitude discover themselves, attract each other, without one harming the other, but the one reinforcing the other.

From these unions, a feeling is born, an emotion grows, a spell is created, the work has taken existence. But two is beautiful, is it enough? Will a new contribution strengthen, will it weaken? The doubt is there, the balance can be upset. To combine one more element may mean moving away from spirit, sensitivity, or even going totally astray. As long as we don’t say full stop, anything can happen, success or failure.
The individual who wants to move forward is tempted by research, sometimes beneficial, often hazardous; yet without audacity, without attempts or without experiments, life and creation very quickly become repetitive, boring and even perhaps tasteless.
Adventure opens up many horizons, life and creation are enriched, we must calm down, improve control, let go, control under the passage of time, whitening the mop, reducing strength, spreading the immensity moreover – where life and the artist may sail on sight, but flourish. 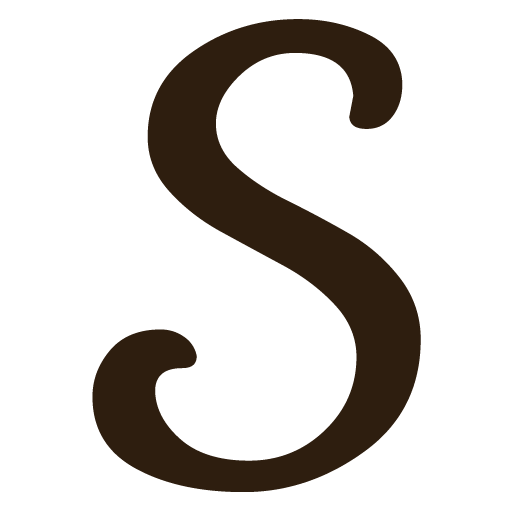 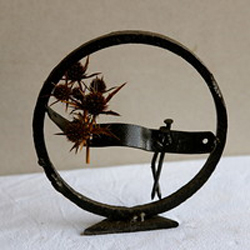 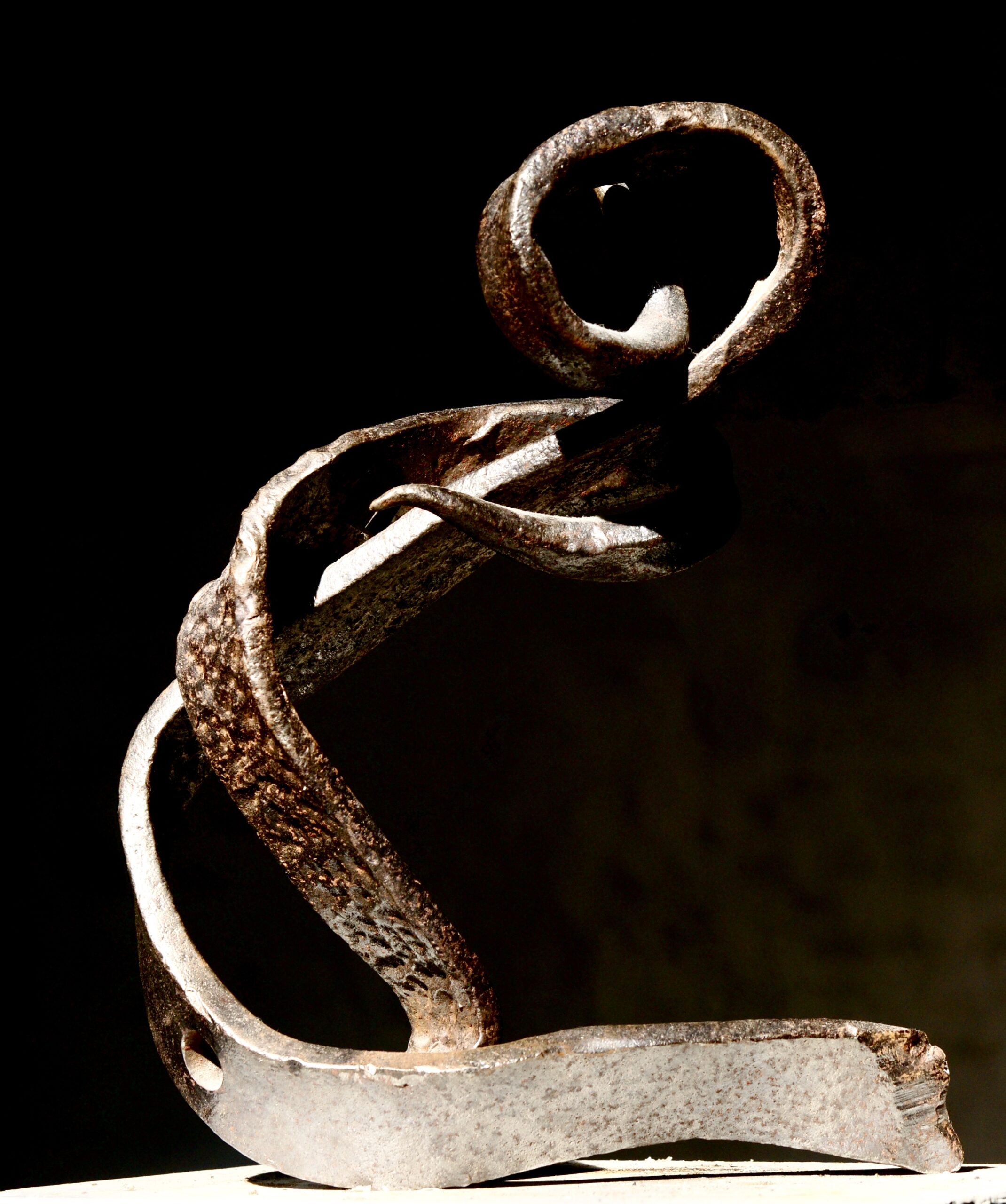 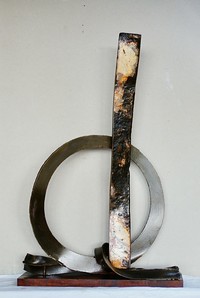 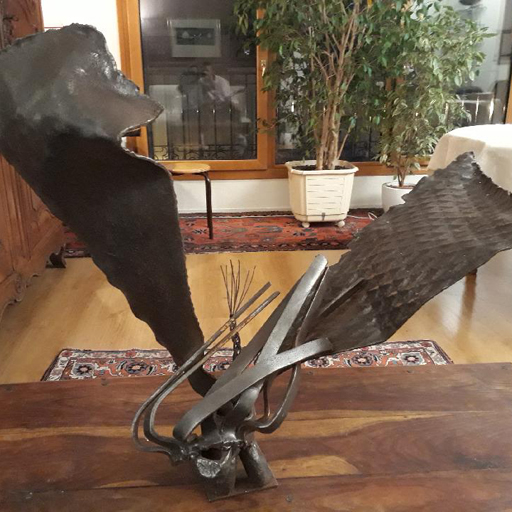 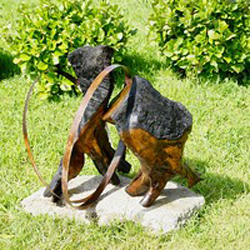 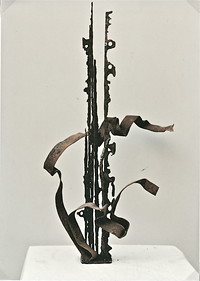 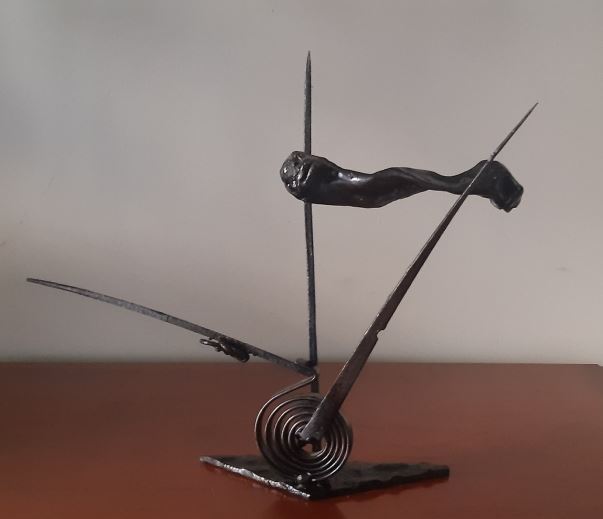 This sculpture by Pierre Le Caër, Frigate, by its movement, takes us to distant lands. We will have to brave the wind and the ocean, with the wind in its sails.

Boarding! Nothing will be able to reach this crew, which splits the wind and the sea like the painting of “Liberty guiding the people”. This very dynamic movement can only conquer you.

An obviously close-knit team, as indicated by its concentric and cylindrical appearance. 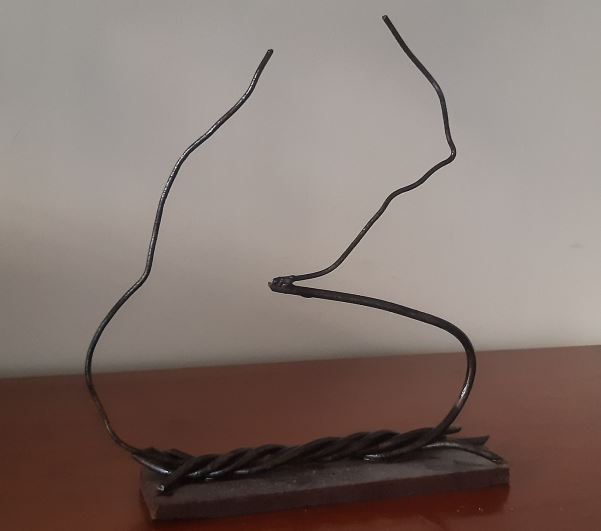 This elegant sculpture by Pierre Le Caër speaks for itself, it is to be placed on a white background which brings out the silhouette of the model.

The Warrior protects what he holds most dear – Untitled – in order to find his rest. “Untitled” is the promise, HIS promise. Promise of the future, sweet and which ensures the transition to the Son who will also protect “Untitled” … and certainly another.

The evocative and unequivocal curves provoke the senses. This sensuality will certainly transport you either in your memories or in your dreams…

All that remains is to put the face on so that your imagination ends “Untitled” and becomes an image. 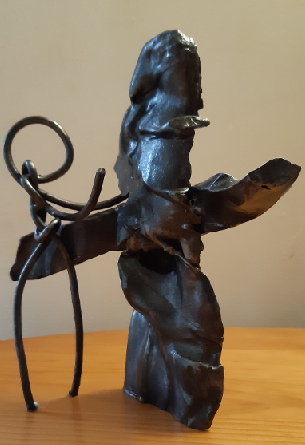 This small sculpture by Pierre Le Caër evokes a hope, the pleasure of waiting for an appointment that we think about long in advance and whose heart sinks as the time approaches.

This statue is the materialization of a gift to make to the Other, to allow to quickly evoke a future, a wish. It’s a joyful, friendly, loving, positive meeting, nothing to do with these dreaded deadlines in life.

I was born on March 7, 1947 in Brest, Brittany, to Breton parents, just west of Finistère, next to the sea.
Passionate about Judo, I left the region in 1968 for Japan where I stayed there for a total of 3 years, alternating returns to the country and many other stays in the United States of America, in Reno in Nevada and in San- Francisco in California for a total of four years. Finally, I opened my own Dojo in Rennes in 1981, stayed there for eight years before moving to Paris in 1989 where I created the “Dojo de la Chapelle” in the 18th arrondissement.
.

It was in Paris in 1995 that I started sculpting.
High-ranking, Judo teacher trained at the Japanese school, I manage to divide my time between my two passions at the bottom of a courtyard where the Dojo and the workshop are located. Ousted in 2017, for real estate reasons, from these magnificent premises, it is in Brittany that I take refuge, devoting today most of my time to creation. But without forgetting to share the knowledge of the Japanese discipline within the “Dojo Brestois” my home club.

Artistic expression was revealed to me in the spring of 1995 in Paris. A thin strip of oak wood hooked my sensitivity, I managed to keep it erect and oscillating thanks to two old and magnificent nails, the beauty of the wood so thin that it is almost transparent, letting in the light and its feverishness but also the strength of the pieces. metal undoubtedly created an aesthetic and touching composition. In view of this object, many people marveled at it and told me about it.

Naturally, each day my steps led me to the small recess which I had made my workshop. I had piled up a lot of various metal parts, stones, pieces of wood gleaned from my walks. The daily creations that came out of it were crowned with the same success. Easy success because it must be said, I exhibited them in the evening, at the bar of the Judo club, in front of my own students.

These objects were accumulating quickly and also my desire to show them, this led me to look for some galleries where to exhibit. I had the experience of two or three bad adventures in Parisian galleries for “attrape nigaud”.

At the same time, Catherine Dechosal the woman I was living with, a teacher by trade, took a sabbatical year to try to boost my potential career. Probably too busy with my job and my involvement in the discipline of Judo, I could not give enough of myself and his work did not prosper. I am always very grateful to her for this and the many catalogs that she compiled still render me many services.

During the year 2000, by the greatest chance, a friend introduced me to the Galerie de Madame Jane Bastien in Brussels. Interested in my work, Madame Bastien immediately exhibited 4 of my works in her gallery.
In a very short time, three sculptures “the Cat”, “Immobility” and “the moon of Montmartre”, were sold. Then she invited me to participate in a collective exhibition, in this same gallery, which was held from June 21 to September 10, 2000. Our collaboration ended in the spring of 2001. Unfortunately for me.

This period gave me a certain self-confidence. I chained several beautiful exhibitions: one in the large and magnificent hall of the head office of Credit Mutuel de Bretagne in Rennes, another at the French Federation of Judo porte de Châtillon in Paris, and also in the entrance hall of the Town Hall of Brest, all large spaces highlighting the most voluminous rooms.

I also exhibited twice at the Dojo Brestois, which was kind enough to welcome me as a former member of the club and a young creator, in a beautiful space where there was a lot of traffic.

In 2003, I was able to invest in premises adjoining my judo club and set up my workshop there while creating an association called “ Le Croisement des Arts ”. This association, whose Presidents were Mr. Michel Brugnon, artist himself in his spare time, then Mr. Gérard Morel, novelist, both enabled us to keep an exhibition room open for a dozen years.

Finally, although I held commercial leases in 2017, I was evicted from my premises, which inevitably marked the end of my Parisian experience as a Judo teacher and also the closure of this workshop-gallery.

I returned to Brittany at Ploudalmézeau in northern Finistère, not too far from Brest. Magnificent region, admittedly a bit austere. However, the important thing for me is the workspace: ” 700 m2 covered “, a large farmer’s shed serving both as a workshop and as accommodation. Everything I needed !

I have been here for almost four years, the installation is progressing, my activity is dense. I am making some progress in my assembly techniques and above all I have a lot of time to myself, an essential element, because it alone reveals the work or not.

On the other hand, I continue Judo and give 2 lessons a week at the Dojo Brestois where I started in 1961, with my teacher, master Claude Urvoy. 9th dan 89 years old still on the tatami and in good shape.

Although I never made too much effort to exhibit or make myself known, a friend finally convinced me to show my creations around the world thanks to this site. I thank him very much.

As for my work, people say that there is a presence in all these objects, I quite agree with that. They also say that everyone can have a different image of it. It is undoubtedly the place of the imagination, because in each subject, indeed, resides the essential expression of an image, of an emotion: the material, true allegory of my sensitivities.

For my part, I like the balance, I like that the work is sufficient for its stability and if I put a base it is to freeze it definitively. When a work is balanced, it already has a great deal of harmony. From the moment when balance and harmony come together, few things thwart the aesthetics and the object seems acceptable and durable to me.

What leads me to these paths? It’s hard to define. I can remain without executing any creation for quite long periods, as long as the material does not challenge me, I remain there empty, dead from all creation.

The news very often hooks me, I reacted spontaneously to the attack of September 11, 2001 in New York, by creating a trilogy. The Covid-19 has generated a fairly long series as well. Poems and songs also often emerge in small objects full of intimacy.

My work is influenced by the region: sea and coast. Strength, permanence and beauty.

Dear visitors, thank you for your visit and I hope you had a pleasant stopover. If you go to Ploudalmézeau do not forget to visit me.